Powerful, emotional testimony is not enough

Focus on the positive while not ignoring the negative when reporting on migration, is a key message that has emerged from Aidan White, the President of the EJN, who has been judging entries to this years EU-funded Migration Media Awards.

White judged over 30 entries in the English written categories in this year’s Awards, which is run by International Centre for Migration Policy Development (ICMPD). The awards aim to reward journalistic excellence when dealing with migration in the ‘Euro-Mediterranean region’. Last year’s winners can be found here: www.migration-media-award.eu

While commending much of the reporting, White notes a troubling tendency for journalists to produce stories that indulge in what he calls “victim journalism” where the focus is on the ordeal of migration, and misery of the process without attempting to search for solutions, hold those responsible to account, or to signpost positive outcomes.

“Well-written, powerful and emotional testimony from victims is not enough for journalism to tell stories effectively and ethically. Revealing the horrors of the crisis is important. But when we do so, we should think about what we can do to make a difference,” White says.

Many of the submissions to this year’s Migration Media Award do rise to this challenge and the best of which will be announced at an event in Tunis in September.

Over the last two years the EJN has also been working with the International Labour Organisation (ILO) to address discriminatory attitudes and actions towards migrant workers by improving reporting on rights of migrant workers and solutions journalism through a fellowship scheme for 20 journalists working in the Gulf region, as well as Jordan and Lebanon.

A good example of solutions journalism about migration came last week when fellow, Laura Secorun Palet, had a op-ed published in the New York Times which addressed not only the legal and logistical reforms needed to improve the rights of migrant workers but made it clear that “to eradicate forced domestic labor, we must confront the rampant prejudice behind it.”

The article went on to point to the nongovernmental organisations that are leading initiatives to educate families about the benefits of respecting the rights of domestic workers and to challenge assumptions about migrant women.

Laura’s piece also gave examples of ethical recruitment companies that are an alternative to the profit-based companies that so often neglect their duty of care to vulnerable people — largely from South East Asia – who they encourage to leave their families with promises that they cannot or do not intend to keep. The efforts of migrant women to unionise and become leading voices in their fight for their own rights are also highlighted.

The initiative for the New York Times op-ed was the criticism faced by a Kuwaiti beauty blogger who said Filipino domestic workers in the region should not be allowed to have a day off or have possession of their own passports. But Laura concludes that: “We cannot put an end to the denigration of domestic workers until we first understand how awfully routine it is. Outrage is necessary. But if we think the problem is a single bigoted blogger, we are missing the forest for the tree.”

This is why journalism like Laura’s and the other fellows on the EJN/ILO scheme is so important. It does not shirk the responsibility to report on the shocking mistreatment of migrant workers, nor does it portray them as victims. Instead complicated issues that the reader may not be familiar with are explained while at the same time giving examples of practical solutions and initiatives that can be an inspiration for governments, activists and migrants.

The EJN’s studies on migration reporting highlight the financial, societal and political pressures on newsrooms that can contribute to migration coverage not living up to its potential to go beyond documenting realities and to offer solutions.

The researchers found that maintaining independence in a challenging work environment was a key concern. However, it is heartening to see that the journalists interviewed have not lost a sense of mission when it comes to the goals and values of the profession.

According to a blog written by the REMINDER researchers:

“As the main motivation many mentioned passion, creativity, curiosity or telling the truth, educating people, having an influence on public opinion and thus on reality. At the same time, almost all feel professionally valued among people whose opinion matters to them, but also perceive a general decline in the public’s trust in their work and the reputation of the news sector as whole.”

Grappling with how to improve trust in journalism through ethical standards, governance and management is at the centre of the EJN’s mission – and is the title of our latest report.

For regular updates about our work and to find out how you can support our work sign up to our weekly newsletter.

Media and Trafficking in Human Beings Guidelines, was authored by the Ethical Journalism Network as part of a project funded by the European Union and implemented by an international consortium led by the International Centre for Migration Policy Development (ICMPD).

Aidan White, discusses how journalists should report on migration and human trafficking in a facebook live for the Thomson Foundation.

The discussion was part of the Thomson Foundation‘s ‘Journalism Now’ online courses, which includes the Ethical Journalist’s Toolkit developed by the EJN.

‘Mixed messages: Media coverage of migration and fatalities’, by Aidan White and Ann Singleton, was originally published as a chapter in ‘Fatal Journeys – Volume 3 – PART 1 – Improving Data on Missing Migrants’.

What decisions are made before photographs of refugees and war victims appear in our newspapers, or as video and stills on our computers, mobiles and television screens? Should journalists be more critical when publishing and interpreting such pictures?

Download the EJN Guidelines on Migration Reporting and use it in your newsroom.

All EJN resources of Migration Reporting can be found here. 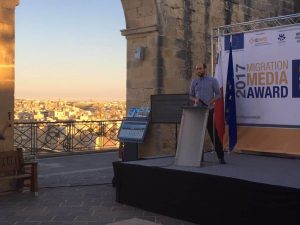 Daniel Trilling accepts 1st prize in the Print category of the 2017 Migration Media Award for his article “What to do with the people who do make it across?” published in the London Review of Books. Valetta, Malta. July 2017.

Join our panel on responsible reporting of suicide and mental health

Ethical journalism includes understanding how some stories can change the world