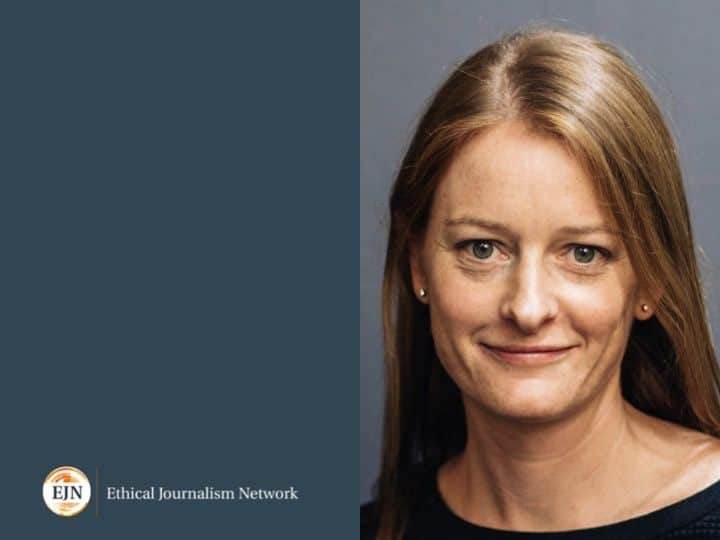 It looks as though it will be an even busier one than last year with a growing number of projects and a new Director to take the EJN forward over the coming years.

As many of you may now know, Hannah Storm joins the EJN on 15 April from the International News safety Institute where she has been the Director since 2012.

Before joining INSI, Storm spent more than a decade working as a journalist for television and radio, online and print for outlets including the BBC, The Times, Reuters and ITN, and Oxfam.

Her appointment was warmly welcomed throughout the international media development community where she is recognised, among others things, as having a special interest in the gendered aspects of safety and is the co-author of ‘No Woman’s Land – On the Frontlines with Female Journalists‘ and ‘Violence and Harassment Against Women in the News Media‘, co-written with the International Women’s Media Foundation.

It is an interest that chimes with many aspects of the EJN’s growing programme and development.

It is good to be able to report not only a number of positive steps in the organisational transition of the EJN but also some very successful initiatives and new projects too.

Declaration on Information and Democracy

It is a recognition and endorsement of the EJN’s burgeoning international reputation that EJN President Aidan White spoke at the Paris Peace Forum, to support the International Declaration on Information and Democracy, initiated by Reporters Without Borders, along with seven heads of state, including Norwegian Prime Minister Erna Solberg, as well as the head of UNESCO and the Council of Europe, on Sunday 11 November.

Coalition for Ethical Journalism in Turkey
One particularly successful project start has been the EJN programme in Turkey, which involves a strategy of low-profile actions to strengthen journalism and media through training and raising awareness and empowering local networks of media partners. Fritt Ord, one of our three funders for work in Turkey, was so impressed by the EJN report of the first phase of the project that they have renewed their grant for a second round of work to complement the EJN’s projects with UNESCO and Norwegian Institute of Journalism.

Elsewhere, I am travelling to Warsaw at the end of this month to meet journalists, editors and publishers with a view to setting up a longer-term project in Poland and other Visegrad countries to create a regional EJN network supported by the Evens Foundation.

On the basis of highly successful meetings in Oslo and the response of the Chinese journalists and academics, we are planning further work in China this year as part of our partnership with the Norwegian Institute of Journalism.

Hate Speech in Palestine and Lebanon
Our other work is also gathering pace. Tom Law took part in a kick-off meeting for EJN hate speech initiative in Palestine at a meeting in Ramallah of the Working Group for Ethical Journalism in Palestine(launched with the support of the EJN in 2016).

Alongside the ARIJ 2018 conference in December, the EJN hosted two working groups with Palestine and Jordanian media and academics to create glossaries on hate speech. Chaired by EJN trustee Dr Zahera Harb, the meetings were attended by journalists, researchers and a member of Facebooks’s Middle East policy team.

The conference also allowed the EJN to showcase our other work in the region with sessions on how the EJN’s Ethical Media Audit process is being used by 7iber, an award-winning Jordanian online magazine. 7iber’s co-founder and executive editor Lina Ejeilat highlighted lessons learned from the process and shared insights about the role of journalism ethics in creating newsroom governance structures, strengthening storytelling and building trust.

Also at ARIJ, the EJN teamed up with the Global Investigative Journalism Network (GIJN) for a session on how journalists can better investigate the suffering of labour migrants in the region.

Fellows from GIJN’s fellowship on labour migration and the EJN’s fellowship scheme with the International Labour Migration provided guidance about abuses of foreign workers and point to potential solutions.

After the session, Tom Law interviewed Sawsan Tabazah one of the ILO/EJN fellows about her experiences covering abuses of domestic workers in Jordan.

One of the most successful events the EJN has ever held took place at the Frontline Club on 25 October as part of the Ethics in the News series of events. Dorothy Byrne chaired a debate, about the legal and ethical issues encountered by journalists when they are asked, sometimes ordered, to testify in international criminal tribunals.

The panel heard from a sitting ICC judge as well as other legal experts and journalists who have given evidence at war crimes tribunals in The Hague. The EJN is now exploring ways in which it can build on the event by offering a resource for journalists around the world called on to give evidence before the ICC who may be seeking advice and guidance.

We are set for a busy year ahead supporting journalism in these difficult times through more projects than ever before. We trust that with your support the EJN will continue to fulfil our shared mission in strengthening journalism around the world.

Chris Elliott is the CEO and Director of the Ethical Journalism Network, having taken over from the organisation’s founder, Aidan White, when he stepped down in April 2018. Elliott was appointed Director of the EJN initially for a year and he resigned from his role as a Trustee to take the position.

From 2010 until March 2016 Chris Elliott served as the readers’ editor at The Guardian having been appointed managing editor in February 2000. Chris has worked as the home affairs correspondent for the Sunday Telegraph, chief reporter for the Sunday Correspondent and assistant news editor for the Times.

In 1995, he joined The Guardian’s newsdesk and was part of the team that won the UKPG Team Reporting Award for the Jonathan Aitken investigation. He has also served on the board of the International News Safety Institute (INSI) and the Nomination Committee of the Reuters Founders Share Company until 2015. He served as a trustee of Concern Worldwide UK from 2007 to 2017, the last three years as chair of the charity’s board of trustees.

Why ethical journalism matters for newsrooms and their audiences

Looking Good in 2016 – the EJN and Ethical Journalism on the March!