Home / News / Journalism must take a lead in countering hate-speech, extremism and propaganda around migration

Journalism must take a lead in countering hate-speech, extremism and propaganda around migration

Journalism must take a lead in countering hate-speech, extremism and propaganda around migration

Journalists often fail to tell the full story about migration and refugees and routinely fall into propaganda traps laid by populist leaning politicians, the director of the Ethical Journalism Network will tell a meeting of the United Nations human rights agency on Thursday 21st April in Geneva.

The meeting at the Office of the High Commissioner for Human Rights – a new initiative to tackle hate speech, extremism and propaganda particularly on the issue of migration – will be addressed by the EJN’s Director Aidan White, the editor of Moving Stories – An International Review of How Media Cover Migration.

Ahead of the meeting White said:

“The migration story remains a supreme challenge for journalism. It is a global story that we need to tell with humanity and without giving voice to hatred and extremism.

“It’s time for policymakers and media leaders at international level to focus on practical ways of helping journalists to tell the story and to pose legitimate questions about integration, limited resources and potential cultural conflicts without resorting to sensationalism.

“The EJN is looking for practical ways to help journalists and their media. Issues will include access to information, avoiding political bias, giving voice to migrants, isolating political hate-mongers and keeping the focus on the role of media to report accurately.

“The current information climate is toxic, particularly in Europe, and we need to ensure media focus on ways in which they can promote dialogues and help people get information that will help them better understand the complex background to the migration and refugee question.” 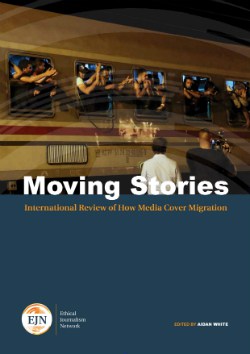 Moving Stories – An International Review of How Media Cover Migration

Moving Stories reviews media coverage of migration in the European Union and in 14 countries across the globe.

Missed Opportunities: How journalists and media in Europe failed to raise the alarm about an imminent influx of refugees fleeing war in Syria and Iraq, even though the story was there to be told a year before the crisis broke in 2015;

Hate-Speech: How outrageous anti-migrant or anti-Muslim statements by politicians like Donald Trump in the United States and some European leaders fuelled increasing public concern and hijacked media coverage;

Falling Standards: How media fail to provide detailed and reliable information about the refugee crisis because of a lack of editorial resources or the presence of well-informed journalists able to provide in-depth and sensitive reporting;

Sensationalism: How much journalism is driven by hyperbole, intolerance and distortion with media in confusion over what are the correct terms to use to describe migrants, refugees, and asylum-seekers.

To counter these problems, the report recommends that news media take urgent action to appoint specialist reporters to the migration beat. It also calls for industry wide and in-house training on migration issues and problems of hate-speech; improved links with migrant and refugee groups; and more employment of journalists from ethnic minority communities to strengthen diversity in newsrooms.

The report highlights how media coverage, much of it negative and focused on numbers of migrants on the move, took a dramatic turn with the death of Alan Kurdi and the publication of pictures of his body on a beach in Turkey. From that moment journalism woke up to the human tragedy within the migration story.

In his foreword to the report Jan Egeland, secretary-general of the Norwegian Refugee Council, sums up the challenge facing media: “It is not just a lack of humanity on the news agenda or a matter of luck or a matter of caring more about some people at the expense of others,” he says. “We need a broader lens to see what really is going on.”

The lack of a wider perspective often leads media to miss the link between migration and human development. Journalists often ignore the evidence of serious studies that illustrate how migration, despite short-term challenges, is invariably beneficial for economic and cultural development in the longer-term.

The reports states: “There is a tendency, both among many politicians and in sections of the mainstream media, to lump migrants together and present them as a seemingly endless tide of people who will steal jobs, become a burden on the state and ultimately threaten the native way of life. Such reporting is not only wrong; it is also dishonest. Migrants often bring enormous benefits to their adopted countries.”

The report covers the EU and 14 countries

The report examines media coverage in a diverse range of countries. From Australia, a country built by migrants, where media struggle to apply well-meaning codes of journalistic practice within a toxic political climate to Nepal and the Gambia which are exporters of labour. In these countries censorship or a lack of resources – or a combination of both – are mainly to blame for poor coverage.

The reports on migration in China, India and Brazil tell another story. Though large numbers of people migrate from each of these countries, the main focus is on internal migration, a global phenomenon often ignored by mainstream media that involves millions and dwarfs international migration numbers. The biggest movement of people in history has taken place in China over the last 35 years.

In Africa while headlines focus on people leaving the continent and heading north, there is also migration between countries, with many people from the impoverished central regions heading for South Africa – a country where media also deal with problems of xenophobia and governmental pressure.

In Europe, where migration and refugee issues have shaken the tree of European unity, media struggle to provide balanced coverage when political leaders respond with a mix of bigotry and panic – some announcing they will only take in Christian migrants while others plan to establish walls and razor wire fences. The report looks at Bulgaria where media have allowed sensationalism to dominate migration reporting and Italy, where hate-speech is counterbalanced by a purpose-built ethical charter for media. In Britain the report notes how the story is often told without a sense of scale or balance with extensive reporting on the plight of people at a small refugee camp in Calais.

In Turkey, seen by many European politicians as a key country in stemming the onward rush of migrants, most media are under the thumb of a government that punishes dissident journalists, so public debate is limited. In Lebanon – which hosts millions of refugees from war-torn Syria – the story is not helped by many media confusing the picture by mixing of fact and opinion.

In the United States the controversial Republican Presidential candidate Donald Trump has made migration an explosive topic. Media time has focused on heated and often racist exchanges, which obscures some fine journalism that provides much-needed context. South of the border, media in Mexico suffer from undue political pressure and self-censorship.

Europe: Countering Propaganda and Hate Speech in the Digital Era