Migration jumped to the top of the news agenda in 2015 with journalists in Europe, Middle East and Africa reporting the biggest mass movement of people around the world in recent history. Television screens and newspapers have been filled with stories about the appalling loss of life and suffering of thousands of people escaping war and poverty.

But how well are media coping with this story and how is migration being reported in other parts of the world? To answer these questions the Ethical Journalism Network published Moving Stories, an international review of how media cover migration and created migration reporting guidelines in 2016 that have formed the basis for EJN training of journalists around Europe over last few years.

In 2017, supporting media to cover migration with more accuracy and humanity continued to be a key part the EJN’s work, culminating in the production of a 17-country study on how media on both sides of the Mediterranean report on migration for the International Centre for Migration Policy Development (ICMPD) and co-authoring a chapter to an IOM publication on improving data on missing migrants.

In 2017 the EJN authored Media and Trafficking in Human Beings – Guidelines for the ICMPD.

In April 2018 the International Centre for Migration Policy Development (ICMPD) published Media and Trafficking in Human Beings – Guidelines, authored by the Ethical Journalism Network’s Aidan White as part of a project funded by the European Union. In his introduction to the guidelines White wrote:

These guidelines aim to help editors and reporters to better understand the issues and to shape their stories in ways that avoid the dangers lurking in an aggressive and competitive media landscape.

The rush to publish, the confused and unreliable world of social media, and the rise of propaganda and political influence add to concerns that journalism is becoming trapped in a world of sensational headlines and sound bites.

Human trafficking, which is closely linked to slavery and forced labour, is a complex social problem that requires thoughtful, informed and, above all, compassionate journalism to provide context, give voice to the victims and assist in the search for solutions.

Media and journalism should play a positive role in persuading the world that trafficking can be diminished if not eradicated. Political leaders and the public at large need to read, hear and see the full story. It is an essential first step in generating the political will needed to overcome the fundamental causes of human trafficking.

The advice and suggestions set out in these pages can help journalists to think twice about how they report on trafficking; to consider the legal and human rights issues involved; the treatment of the victims, their privacy and welfare; and how to tell the story with humanity and style while helping audiences to understand better what must be done.

The EJN’s Director Aidan White, co-wrote the third chapter, ‘Challenges faced by the media in reporting migrant deaths’, with Ann Singleton a Senior Research Fellow at the University of Bristol and Senior Advisor to the International Organisation of Migration’s Global Migration Data Analysis Centre (GMDAC). The chapter focuses on the ethical challenges of reporting on the missing and dead, and how can information be presented without de-humanising the victims or breaching their rights to privacy.

Read the chapter co-authored by the EJN here.

The preliminary findings of the study were launched in January 2017 at the Brussels Press Club with the full study launched in May 2017. The study covers nine EU countries and eight countries in the south of the Mediterranean. It finds that journalists are often poorly informed about the complex nature of migration as a phenomenon. At the same time newsrooms are also vulnerable to pressure, manipulation and hate speech by some political elites or voices on social media networks. The study also highlights inspirational examples of journalism at its best –resourceful, painstaking, and marked by careful, sensitive and humanitarian reporting. In order to address the identified challenges it  provides a series of detailed recommendations and calls for training, better funding of media action and other activities to support and foster more balanced and fact-based journalism on immigration, emigration, integration, asylum and other migration-related challenges.[/vc_column_text][/vc_column_inner][vc_column_inner width=”1/3″][vc_single_image image=”20783″ img_size=”full” alignment=”center” onclick=”custom_link” img_link_target=”_blank” link=”https://ethicaljournalismnetwork.org/wp-content/uploads/2017/03/Draft_Migration_and_Media_Report.pdf”][vc_btn title=”Download the full report here” color=”orange” size=”lg” align=”center” link=”url:https%3A%2F%2Fethicaljournalismnetwork.org%2Fresources%2Fpublications%2Fmedia-mediterranean-migration|||”][/vc_column_inner][/vc_row_inner][vc_custom_heading text=”Moving Stories ” font_container=”tag:h1|text_align:left” use_theme_fonts=”yes” link=”url:https%3A%2F%2Fethicaljournalismnetwork.org%2Fresources%2Fpublications%2Fmoving-stories|||”][vc_column_text]The Ethical Journalism Network commissioned Moving Stories in 2015 – a review of how media in selected countries have reported on refugees and migrants in a tumultuous year. The writers and researchers from or working in the 14 countries covered in the report examine the quality of coverage and to highlight reporting problems as well as good work.

The conclusions and recommendations from many different parts of the world are remarkably similar: journalism under pressure from a weakening media economy; political bias and opportunism that drives the news agenda; the dangers of hate-speech, stereotyping and social exclusion of refugees and migrants. But at the same time there have been inspiring examples of careful, sensitive and ethical journalism that have shown empathy for the victims.

What is unquestionable is that media everywhere play a vital role in bringing the world’s attention to these events.[/vc_column_text][vc_single_image image=”12829″ img_size=”full” onclick=”custom_link” link=”https://ethicaljournalismnetwork.org/resources/publications/moving-stories”][vc_btn title=”Download the full report here” color=”orange” size=”lg” align=”center” link=”url:https%3A%2F%2Fethicaljournalismnetwork.org%2Fwp-content%2Fuploads%2F2016%2F09%2Fmoving-stories-ejn.pdf|||”][vc_column_text]

[/vc_column_text][vc_row_inner][vc_column_inner width=”1/2″][vc_column_text]What decisions are made before photographs of refugees and war victims appear in our newspapers, or as video and stills on our computers, mobiles and television screens?

Should journalists be more critical when publishing and interpreting such pictures?

These were among the questions we explore in the Refugee Images – Ethics in the Picture chapter of the EJN’s 2017 Ethics in the News. This chapter, by Misja Pekel and Maud van de Rejit was published on December 18, 2016 to coincide with International Migrants Day.[/vc_column_text][vc_btn title=”Read the report on refugee images here” color=”orange” size=”lg” align=”center” link=”url:https%3A%2F%2Fethicaljournalismnetwork.org%2Fresources%2Fpublications%2Fethics-in-the-news%2Frefugee-images|||”][/vc_column_inner][vc_column_inner width=”1/2″][vc_single_image image=”19446″ img_size=”full” alignment=”center” onclick=”custom_link” link=”https://ethicaljournalismnetwork.org/resources/publications/ethics-in-the-news/refugee-images”][/vc_column_inner][/vc_row_inner][vc_custom_heading text=”EJN work on Media and Migration in 2017″ font_container=”tag:h1|text_align:left” use_theme_fonts=”yes” link=”url:http%3A%2F%2Fwww.euneighbours.eu%2Fen%2Fsouth%2Fstay-informed%2Fnews%2Fmigration-media-award-eu-competition-recognise-excellence-covering|||”][vc_row_inner][vc_column_inner width=”1/2″][vc_column_text]

The EJN’s CEO Aidan White took part in the judging panel for the ICMPD Migration Media Award launched in 2017 to recognise and reward the excellence, relevance and newsworthiness of journalism pieces dealing with migration in the Euro-Mediterranean region.

For more information got to: http://www.migration-media-award.eu/

EJN work on Media and Migration in 2016

In the first months of the year the EJN took part in events in Nottingham and London, including migration and media policy events, hosted by Overseas Development Institute and the London School of Economics, to follow up on the Moving Stories report.

On March 18 the EJN Director addressed to the UNESCO IPDC conference in Paris on media and migration and joined the Office of the Commissioner for Human Rights Expert Group meeting on migration held in Geneva on April 21.

EJN Board member Chris Elliott presented the findings of the Moving Stories reports at three media events over the year:

In May, the EJN and Indonesian Press Council hosted and event to promote better migration coverage, including a special screening of “Sea of pictures” a documentary about how the images of Aylan Kurdi became shared so widely and became a symbol of the refugee crisis. After the screening, the film’s producer, Misja Pekel, joined the event via Skype for a debate on the ethics of using such images. The EJN also used the event to present the findings of the recent Moving Stories report. You can find an album of pictures from the event here.

On September 5 the EJN made a key intervention on hate speech, refugees and media ethics at the Bled Democracy Forum, in Slovenia.

The EJN’s migration reporting guidelines were launched at the Global Forum for Media Development World Forum in Jakarta in September and presented by the EJN chair at the October 1 Prix Italia workshop on How Migration is Reshaping Europe and Journalism held in Lampedusa, Italy.

As the year came to an end, the issue of refugees remained at the heart of discussions. The EJN took part in the November 7 Prague Media Point Conference on Media and Migration and on November 24 at the EU conference on communicating migration held in Vienna.

The year ended much as it had begun, with a focus on migration, hate-speech and the need for ethics at all levels of journalism.[/vc_column_text][vc_custom_heading text=”Latest news and activities on media and migration” font_container=”tag:h2|font_size:30|text_align:left” use_theme_fonts=”yes” css=”.vc_custom_1472567124406{margin-bottom: 30px !important;}”][vc_basic_grid post_type=”post” max_items=”6″ item=”706″ grid_id=”vc_gid:1526915354350-3a5d87f37e96e9c24025ee34b7108a60-3″ taxonomies=”428″ el_class=”smallnewstext”][vc_separator][vc_video link=”https://www.youtube.com/watch?v=4ipb8lbjKFk” title=”How can broadcasters tell the story of migration in a ethical way?”][vc_column_text]Jackie Long, who won the the Sue-lloyd Roberts Media Award with Lee Sorrell for their Channel 4 News piece Inside Yarls Wood at the 2016 Women on the Move Awards, tells the EJN is this video that humanising the story and putting migration in context is essential.[/vc_column_text][vc_video link=”https://www.youtube.com/watch?v=Yv8oXfh_tCI&feature=youtu.be” title=”ILO – Why is reporting fairly on migration so important?”][vc_column_text]Millions of people have move to Middle East in search for decent work. This video from the International Labor Organisation highlights how media reporting on labour migration plays a critical role in how migrant workers are viewed in their host country and internationally.[/vc_column_text][vc_column_text]

Resources on Media and Migration

The Global Investigative Journalists Network (GIJN) has launched a collection of resources on migration reporting in 2018. As well as featuring the EJN’s recent reports and guidelines there is a wealth of useful information in the four sections: 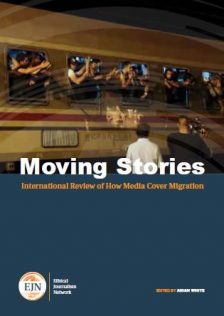