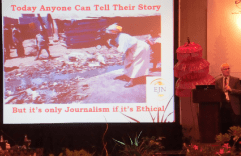 More than 90 journalists and media leaders from 25 countries in Asia have backed an EJN call for a new global debate on transforming the open information landscape by promoting self-regulating standards based upon key ethical principles of journalism.

Participants meeting this week at the 6th Bali Media Forum agreed that basic ethics of journalism – and particularly the cardinal principles of accuracy, humanity, and accountability – should apply to all players across the worldwide web.

The call, which is an effort to reclaim the Internet as a force for democratic communications, comes only days after Time Berners-Lee, inventor of the worldwide web, said that a ‘Magna Carta’ or a new bill of rights should be drawn up to define information rights.

He argues that the web has lost its allure as a force for progressive and democratic communications in the wake of increasing control by governments and corporations that now dominate the open Internet space.

The meeting in Bali agreed that such a bill of rights will be stronger if it comes with a commitment to target those who abuse the Internet. The growth of anti-social and potentially dangerous speech that encourages hatred, bullying and discrimination has raised new fears of governmental censorship.

But journalists argue that combatting irresponsible communications is best achieved by promoting self-regulating principles, not by encouraging further legal restraints.

The conclusions of the Bali meeting, organised by the Thomson Foundation, the Indonesian Press Council and the Institute for Peace and Democracy, and in partnership with the EJN, reaffirmed that creating an enabling environment to support free media and independent journalism, without any form of legal or political pressure, must be a priority for all governments committed to democracy.

The meeting noted that the core ethics of journalism – truth, independence, impartiality, humanity and a commitment to do no harm, as well as accountability – should be strengthened across all platforms of media, but these could not be applied to other groups of Internet users.

The different pillars of the public information landscape – including corporate communications, state and political information services and the distinct voice of citizens heard through social networks – could not be expected to be independent, impartial or fair. Indeed, free expression rights include the right to be biased, even offensive.

Nevertheless, the meeting noted that three of journalism’s cardinal principles should be shared and encouraged among the wider public and across the open Internet. These are:

The meeting’s attendees agreed journalists and media should discuss ways of improving Internet standards based on these principles and should work with other groups such as corporations (including commercial and non-commercial interests); political and state institutions; and civil society and individuals.

The attendees also agreed to develop campaigns and media literacy training, particularly directed at young people. Editors and journalists should engage with the young media audience and should support home-grown initiatives aimed at promoting ethics such as the Online News Association initiative encouraging online providers to “Build your own ethics’ code.”

In addition, the meeting is supporting an Asia-Pacific network of press councils and will assist in the creation of independent media councils. Participants agreed to develop targeted on-line training materials for journalists and bloggers and to provide practical advice to help them meet ethical standards under the pressures of the 24-hour newsroom.

This bold agenda for action was placed before leaders of the 85 countries attending the Bali Democracy Forum, which met alongside the media forum.

While the journalists pressed governments to recognise that open exchange of ethical information across borders is essential to building democracy, they made their appeal without any false illusions of the difficult realities facing thousands of media people across the region. The conclusions of the forum also contained an appeal to free jailed journalists and a demand for states to lift legal and political pressures on media.

Click here for more information on the Bali Media Forum