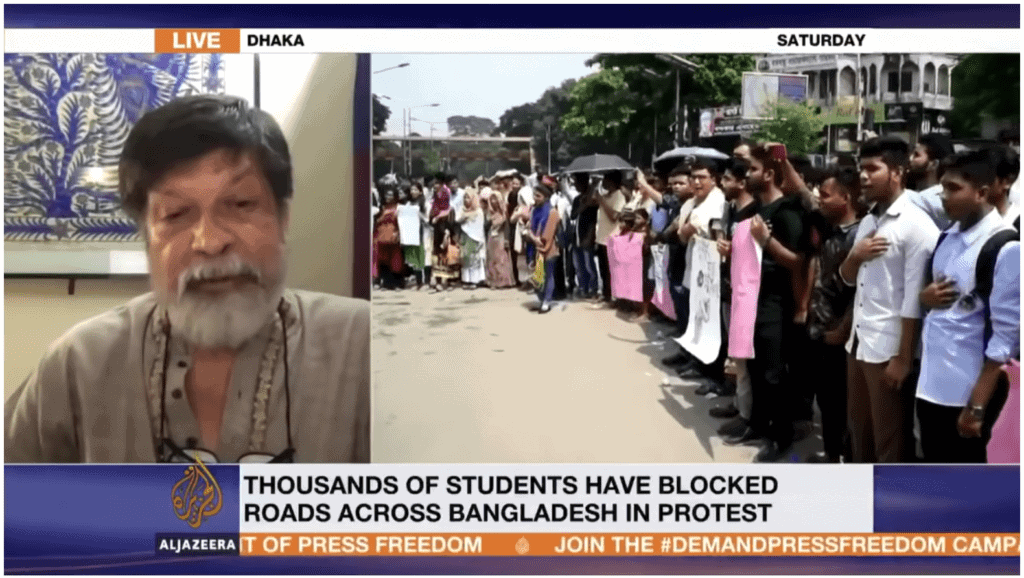 “I have always understood that the role of photographers and journalists are critical in winning hearts, minds and raising money for good causes. Of all the amazing photojournalists I have worked with over three decades Shahidul Alam has stood out for his absolute dedication, his generosity, his humility, his passion and his absolute brilliance as a photographer and journalist.”

Human rights campaigner Lyndall Stein calls for the release of journalist and photographer, Shahidul Alam, who has been held by Bangladeshi authorities since 5 August after he gave an interview to Al Jazeera about recent street protests. Stein, who has known Alam since the early 90’s, describes him as “a powerful courageous figure who exemplifies why we must defend freedom of the press.”

Shahidul Alam, is an internationally acclaimed Bangladeshi photographer and visionary witness to some of the most critical social and political crises of the last thirty years.

He has bravely travelled through wars, floods, and storms; has challenged prejudice, has stood alongside the poorest and most powerless as they have faced violence and terror, he has told the stories of sex workers and gay men facing stigma and discrimination, he has worked with women who have had their lives destroyed by acid attacks – both to record their experiences and to give them a voice to tell their own stories. Late at night on 5 August he was forcibly removed from his own home in Dhaka by at least 25 men from the city’s Detective Branch who attacked the watchmen, taped over the CTV cameras then took him to a jail in Dhaka, then beat him and tortured him.

He was on remand for a week but instead of bringing him to the court this week they removed him to a prison many miles outside Dhaka and are holding him until the 10 September on false charges. All this to extract a ‘confession’ and admit the ‘crime’ of bearing witness to the protests of students in Dhaka over the past two weeks after an interview he gave to Al Jazeera.

There is now a campaign from dark forces in Dhaka to destroy his reputation through lies and smears as the state sees the global campaign calling for his release strengthening – this has included a statement signed by over 200 cultural leaders in Mexico, major stories in the Guardian, the BBC and the New York Times and demonstrations in London, Bangladesh and around the world.

Over four decades, Shahidul has made a powerful contribution to Bangladesh and to the world – he has always been especially committed to young people. He has trained and inspired hundreds of photographers through his institutions, Drik the photo agency and Pathshala the college he founded, and he has inspired many more. He started Chobi Mela the internationally acclaimed photographic festival in 2000.

For his extraordinary talent as a photographer, he received the Harvey Harris Trophy in 1983, Mother Jones Awards for documentary in 1993, Andrea Frank Foundation and Howard Chapnick Awards in ’98, Shilpakala Padak in 2014, Lifetime Achievement Award in 7th Dali International Photo Exhibition in China in 2017, in October he is due to be awarded one of the most prestigious photographic accolades in the world the Lucie Foundation Humanitarian Award.

Shahidul has not only won the most prestigious accolades in the world of photography but has also told the story of most of the issues of our day, including working with Positive Lives on the impact of HIV/AIDS in the region, the disastrous floods during the Tsunami, the trafficking of people, violence towards women, the extra judicial killings of activists and most recently the crisis of the Rohingya people.

Shahidul Alam exemplifies the best qualities of a true global citizen and journalist, bearing witness with courage and vision, always willing to share his knowledge with generosity and commitment, standing up for freedom, fairness and our common humanity.

I first met Shahidul in the early 90’s when Terrence Higgins Trust had launched a photographic project Positive Lives which covered the impact of HIV/AIDS in the UK. Shahidul explained that he wanted to take the exhibition to Dhaka and he wanted to develop a new chapter on HIV/AIDS in Bangladesh. This was a bold move at a time when the stigma was so terrible and the UK story showed many stories about gay men which was a hard subject to portray in Dhaka. With the help of the Elton John Foundation he built a new chapter which showed what was then an entirely unreported story of how HIV/AIDS was affecting sex workers and young gay men in his own country.

I have always understood that the role of photographers and journalists in communicating these stories were absolutely critical in winning hearts, minds and raising money for good causes. Of all the amazing photojournalists I have worked with over three decades Shahidul has stood out for his absolute dedication, his generosity , his humility, his passion and his absolute brilliance as a photographer and journalist.

The campaign to free Shahidul Alam must succeed. He is a powerful force for good, a witness for the world a compassionate critical voice, and a powerful courageous figure who exemplifies why we must defend freedom of the press.

For over forty years Lyndall Stein has worked to build support for often unpopular or difficult causes – for the liberation of South Africa in the 80’s, for the rights of those excluded from society through stigma poverty and discrimination, and to tell the story of the strength courage and creativity of those affected by HIV/AIDS.

Journalism in the time of hate