Home / News / Hate Speech On The Rise In African Media

Hate Speech On The Rise In African Media 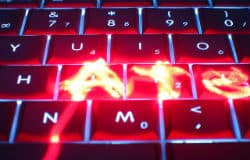 With a perceived rise in radicalism and hate speech perpetuated in the media, media leaders from across the African continent have launched a campaign against hate speech in the press.

At a press conference in Johannesburg on Monday, members from the African Media Leaders Forum (AMLF) and the African Media Initiative (AMI) said the intention was to call on media leaders and operators on the continent to support the initiative.

AMI’s chief executive Eric Chinje told the Mail & Guardian that hate speech was a prism through which a variety of issues facing the media could be viewed.

Chinje said the rise was evident across countries. He mentioned Nigeria, Mali, Niger, Somalia and Kenya as examples.

“It’s happening all around us. All of a sudden, Africa again is becoming the land of strife. And in different ways, its not always like Rwanda in 1994 but there is a growing sense of exclusion on the continent, and the media appears to be a part of it,” Chinje said.

He said that hate speech was also an expression of radicalism and racism on the continent, and the media’s reflection of this was an indication that the industry was in crisis on the continent.

“We think hate speech is an extreme case of professional responsibility, so we want to use that also as a reminder of the need for fair and balanced journalism,” he added.

Jay Naidoo, former minister of communications and one of the co-chairs of this year’s AMLF said the issue continued to tear communities apart on the continent and was a serious hindrance to freedom of the press.

Chinje also said that hate speech was an indicator of “media capture”. He said that if media houses were financially stable and independent, they would not be as prone to expressing the voices of politicians wanting to incite violence.

This year’s AMLF will take place in November in Johannesburg.

This post was originally published on the Mail & Guardian and kindly republished with permission.
Photo source: Flicker CC BY-SA Reinier Ladan
Sign up for the Ethical Journalism Network’s newsletter to get weekly updates on ethical news.