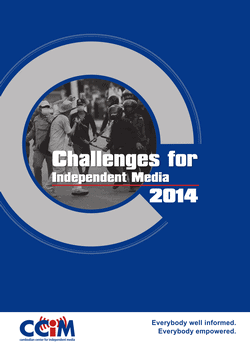 2014 was a notable year for journalism in Cambodia, with no shortage of news to cover, starting with the labor and political protests in the first months of the year and culminating in the historic negotiations in July that ended a year-long political gridlock. But in the midst of these historic events, Cambodian journalists increasingly found themselves in the news, as reporters faced injury and even death for covering the news. 2014 proved the deadliest year for Cambodian journalists since the political turmoil of 1997, with two Cambodian journalists confirmed murdered in relation to their work and a third, foreign journalist found dead under suspicious circumstances.

Nonetheless, a survey of professional journalists conducted by the Cambodian Center for Independent Media (CCIM) in November and December found that the majority of journalists feel the country’s media sector is headed in the right direction. Many respondents attributed this feeling to the rise of the Internet, and particularly social media and smartphones, in facilitating real-time access to news and spurring online debate and discussion over current events.

But even in the midst of a Cambodian Internet revolution that is changing the way journalists and citizens alike access information, the vast majority of journalists surveyed for this report indicated that the country’s lack of an Access to Information Law hinders their ability to report the news. Moreover, almost half of journalists did not feel completely free to report on all issues without interference or fear of repercussions. Discouragingly, aside from the expected sources of repercussions, such as local authorities and politicians, more than a quarter of respondents said they faced interference or repercussions
from within their own media organization, typically from owners or publishers.

This report highlights the key findings of the recent survey of Cambodian journalists and examines notable developments and challenges within the Cambodian media industry in 2014, ending with a number of recommendations for improving and expanding the independence of Cambodian media in 2015 and beyond.