This article was originally given as a keynote address by the Federation of African Journalists President, Mohammed Garba, at the workshop on “ Turning the Page of Hate” held in Tanzania. 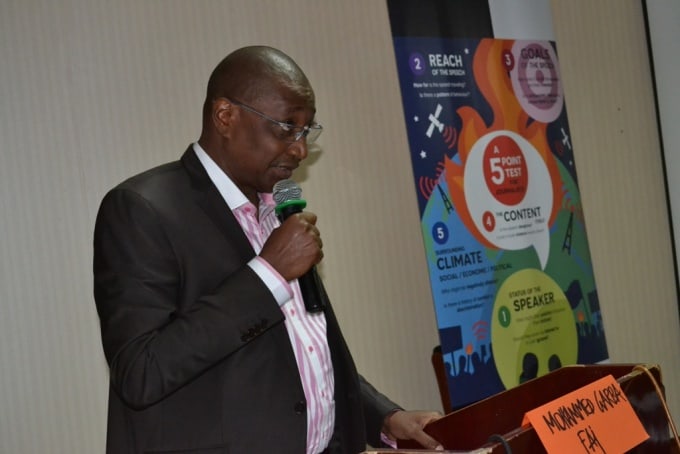 Let me first start by seizing this unique opportunity in thanking the organizers of this important workshop in inviting me to give the keynote address on “Turning the Page of Hate” a very sensitive topic that we all know is already taking its toll on the media in our dear continent. Let me quickly add that this is also a topic that the Federation of African Journalists (FAJ) has placed high on its priority list and have been relentlessly calling on our affiliates to desist from all forms of reports that are aimed at castigating one’s religion, nationality, ethnicity, race, gender and personality.

We are all very much aware that the African media have been confronted with mountainous challenges over the past two decades. It is evident that within every three or four year cycle, the African media find itself entangled with a new problem that threatens the cardinal principles of the media and the media’s existence. Just a few years ago journalists across the continent, have been faced with an uphill battle in relation to the obnoxious legislations that had been randomly promulgated by the various governments, in order to clip the wings of the media. The decriminalization of libel has been fought on the battlefield of the court rooms with all intensity and thank God we are seeing some form of improvement in this.

In the same vein, journalists in the continent had rallied with all their energy to denounce the killing of journalists with impunity. The safety and security of journalists has always been a critical concern that needed attention if the profession should achieve the desired goals that it has set out for itself. So also is the issue of the working conditions of journalists, gender equity and equality in the media houses and in the unions as well as the issued of exiled and jailed journalists.

However, in recent times, one negative phenomenon which has raised its ugly head to threaten the very existence of the media in Africa is the issue of hate speech. Too often, hate speech is very narrowly defined in the African media and mostly limited to “insults that are pronounced by politicians or people in authority” or the cohorts and collaborators of these politicians and those in authority. But in truth hate speech goes far beyond mere insults by politicians or people in authority. In my own perception, any form of speech or writing that incites discrimination, violence, or disparages one’s ethnicity, language, religion or gender, or intimidates one’s peaceful existence is tantamount to hate speech.

By extension, the utterance of whatever that the law prohibits should also fall into the realm of hate speech. The International Covenant on Civil and Political Rights (ICCPR) which most African countries have signed and ratified, clearly states that “any advocacy of national, racial or religious hatred that constitute incitement to discrimination , hostility or violence, shall be prohibited by law”. From the international context, it is evident that any speech uttered with malicious intent or harm, denigrate or dehumanize, falls within the circles of hate speech.

Today, the African media is battling in order to overcome this menace that is drafting the media from its original sailing lines. The recent xenophobic attacks in the Republic of South Africa, the unwarranted massacres that had taken place in the Central African Republic and the ethnic strives in Southern Sudan are all perpetrated by hate speech. Of course one cannot talk about hate speech in Africa any more without making reference to the 1994 Rwandan genocide which was perpetrated by hate speech through the media. Hate speech therefore fuels chaos and anarchy and breeds criminality.

If we were to make a cursory glance today at what propels hate speech in the African media, we will surely come out with some very interesting revelations. One thing that will however not be able to escape that battering of such a glance will be the activities of politicians in relation to hate speech. There is one school of thought which indicates that Africans are still far away from conducting election that are violence and strife free. African elections as we know today are persistently marred by violence and unnecessary strife, with the majority of politicians making very irresponsible statements in order to win votes by all means necessary. African politics is still largely characterized by ethnicity, religion and “wealth” whether legitimate or not and politicians being aware of these issues use these sensitive themes for their own political interest.

In Africa today, both the public and private media are to some extent guilty of fuelling hate speeches most especially those uttered by the politicians and their cohorts. Politicians from the ruling parties often monopolized the state media and use it as a propaganda tool to attack their opponents without any form of decency. Opposition politicians are chastised and castigated; their ethnicity and citizenship derogated and denounced; their lives threatened all in a bid to win cheap popularity and undeserved votes. Unfortunately, such unscrupulous politicians are in most instances aided and abetted by journalists who are on the payroll of these politicians or the state in these indecent assaults. In this regard both journalists and politicians become guilty of fuelling hate speech. This is a total disservice to our profession.

In a similar manner, opposition politicians who are denied access to the state media during their campaigns pitched their tents with the private media and use journalists to advocate for their political ideals. Such journalists also use the pages of their newspapers or radio station to fuel hate speeches. These had happened in Cote d’Ivoire when journalists were clearly divided on political lines abdicating their professional responsibilities to the detriment of the country. Such a scenario is very much in existence in many countries in the continent today.

Today, it is unfortunate to say that the social media had become the epicentre of hate speech. Hate speech of all form are perpetrated on the social media; Facebook, Twitter and other private blogs are inundated with messages of hate. Some of these sites are awash with sexual violence against women, racial discrimination, religious intolerance and total disrespect and disregard for minority groups. Some media scholars have however argued that the vast majority of “hate speech writers” on social media and the internet in general are not journalists and have nothing to do with journalism. These are simply a group of people who abuse their right to freedom of expression while at the same time abusing the rights of other. They have no idea of how the conventional media operates and no knowledge whatsoever of the ethics of the profession. Let us therefore not make any mistake in calling such people journalists.

The African media and African journalists in particular however, must be able to exercise restraint and to desist from all forms of hate speech by anchoring all their reports on the principles of equity and the respect of the ethics of the professions. As journalists we are entrusted with monitoring, reporting and safeguarding the status quo, if it leaves its track of civility, democracy and the rule of law. We cannot do this however, if we get ourselves involved in partisan politics, or discriminate other members of society because we simply and erroneously feel that our societies are better than the rest.

As journalists therefore we must be able to stand our ground and say NO, to ethnic hatred, religious bigotry, racial discrimination and gender inequality and to be ready to denounce these negative vices wherever they raised their ugly heads. The African media should be more vigilant in countering hate speech messages in the most decent manner. The Federation of African Journalists would like to reiterate its unequivocal stance against all forms of hate speech and will always open its door to media organizations and human rights defenders to work together in curbing this menace once and for all.

On the other hand, African governments should also endeavour to put in place very stiff legislations against hate speech that are implemented to the letter, irrespective of one’s position in society.

We can only move ahead in this world when everyone’s right to peaceful existence, his/her dignity, self pride and respected is guaranteed and protected by the laws of the land. Hate speeches have no place in a democratic society.