In Asia the EJN engagement with teachers and professors in Malaysia, Thailand, Vietnam as part of a media literacy project run by the University of Vienna and the organization of two seminars on ethics for students and teachers at the National Communications University of China in Beijing and the Fujian Normal University in Fuzhou.

EJN Activities in Asia in 2016

Newsrooms’ updates to style guide entries related to race are heartening, but far from comprehensive

Who’s behind the news? Why we need to know, especially now. Kashmir: The difference between journalism and propaganda

Press freedom under attack: why Filipino journalist Maria Ressa’s arrest should matter to all of us

Journalism in the time of hate 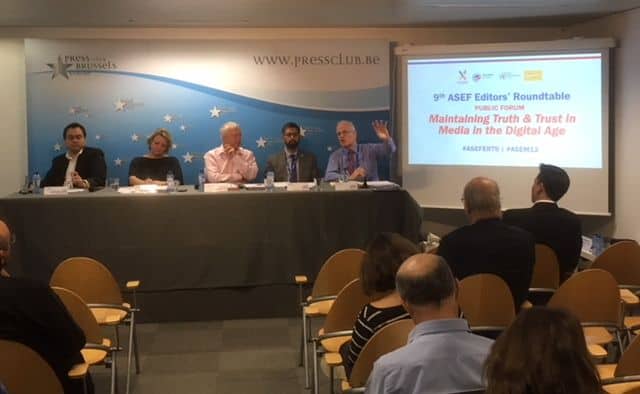 Exploring the Battlefronts of ‘Fake News’: A Tripartite Approach to the Fight Against Misinformation The ethics of ‘securitising’ Australian cyberspace

Fighting back against prolific online harassment in the Philippines Media Ethics and the Future of Television News

Journalism and the challenge of hate spin

From Tampa to now: how reporting on asylum seekers has been a triumph of spin over substance

Beyond the war of words: how might the Australian media’s coverage of China affect social cohesion? Worth a thousand words – how photos shape attitudes to refugees

Photojournalism is about humanising problems, not sensationalising them

Celebrating Good journalism: A Helping Hand From the United Nations

What Democratic Elections Require From Media

Public Trust in the Digital Age: A Moment of Truth for Media and Journalism

A Letter to Readers

News and Activities by region